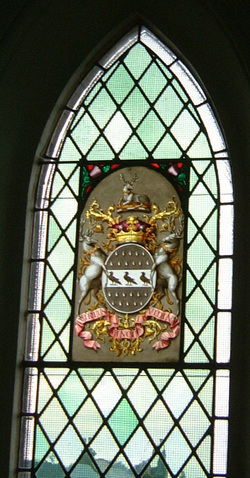 The Cornwallis Window, located on the west wall of the stair tower, depicts the armorial bearing of Charles, 2nd and last Marquess Cornwallis (1774-1823) the husband of Lady Louisa Gordon, the fourth daughter of Alexander, 4th Duke of Gordon, by his wife, Jane Maxwell.

Lady Louisa was born at Gordon Castle on December 27th, 1776 and married on April 17th, 1797, Charles Viscount Brome, the only son and heir of General the 1st Marquess Cornwallis.   Viscount Brome is alleged to have expressed to the Duchess of Gordon some hesitation about marrying her daughter on account of the supposed insanity in the Gordon family.  He received from Duchess Jane the gratifying and now famous assurance that there was not one drop of Gordon blood in Louisa.

Viscount Brome succeeded his father as 2nd Marquess Cornwallis in 1805 and died in London on August 9th, 1823 when the Marquessate became extinct.  He was survived by Louisa and their five daughters.  Louisa died in London on December 12th, 1850.

There exists an interesting if somewhat obscure point of interest with this window.  When this window was installed (presumably in the Chapel itself at the time of its construction in 1834) the Arms depicted were already extinct  as it includes the Marquess’s coronet and after 1823 (when the marquessate became extinct) only the Earldom of Cornwallis continued to exist so even at its creation this window represented an heraldic achievement that was no longer in use.

The achievement is described thus:  Arms: Sable, guttée d’eau on a fess argent three Cornish choughs proper.  Crest: On a mount vert a stag lodged regardant argent, attired or, gorged with a chaplet of laural proper and vulned on the shoulder gules.  Supporters: On either side a stag argent, attired or and gorged with a chaplet of oak vert, fructed or.  Motto: Virtus vincit invidiam [Virtue overcomes envy].  The coronet is that of a Marquess (alternately strawberry leaves and silver balls).

The Duke of Bedford Window

The Bedford Window, located on the south wall of the stair tower, depicts the armorial bearing of John Russell, 6th Duke of Bedford (1766-1839) the husband of Lady Georgiana Gordon, the fifth daughter of Alexander, 4th Duke of Gordon, by his wife, Jane Maxwell.

Lady Georgiana (sometimes given as Georgina) was born at Gordon Castle on July 18th, 1781 and married on June 23rd, 1803, as his second wife, John, 6th Duke of Bedford.   The Duke and Duchess of Bedford were devoted to the Highlands and frequently resided at Kinrara.  They were also regular visitors to Gordon Castle.  Indeed, their daughter, Lady Louisa Russell, married the Marquess (later Duke) of Abercorn at Gordon Castle on October 25th, 1832. HRH the Duke of Cambridge is a descendant of this marriage.

The Duchess is perhaps best remembered today as the mistress of the celebrated painter, Sir Edwin Landseer.  The Duke of Bedford died at Doune, Rothiemurchas on October 20th, 1839 and the Duchess died at Nice on February 24th, 1853 and was buried there.  The Duchess was (2002) the subject of a biography entitled Mistress of the Arts: the passionate life of Georgina Duchess of Bedford by Rachel Trethewey.

The achievement is described thus:  Arms: Argent, a lion rampant gules, on a chief sable three escallops of the first.   Crest: A goat statant argent, armed and unguled or.  Supporters: Dexter, a lion rampant gules, gorged with a collar argent charged with three escallops sable; sinister, a goat argent, armed unguled and bearded or,  Motto (the famous motto of the Russells): Che sara sara [What will be will be].  The coronet is that of a Duke (strawberry leaves).